We left Andoain with many thanks to Joseba for helping us so much, and we hit the road for wine country. We were sorry to leave the coast and the beauty of Asturias and Cantabria, since it was cool and beautiful, and we really enjoyed the Basque culture and hospitality. 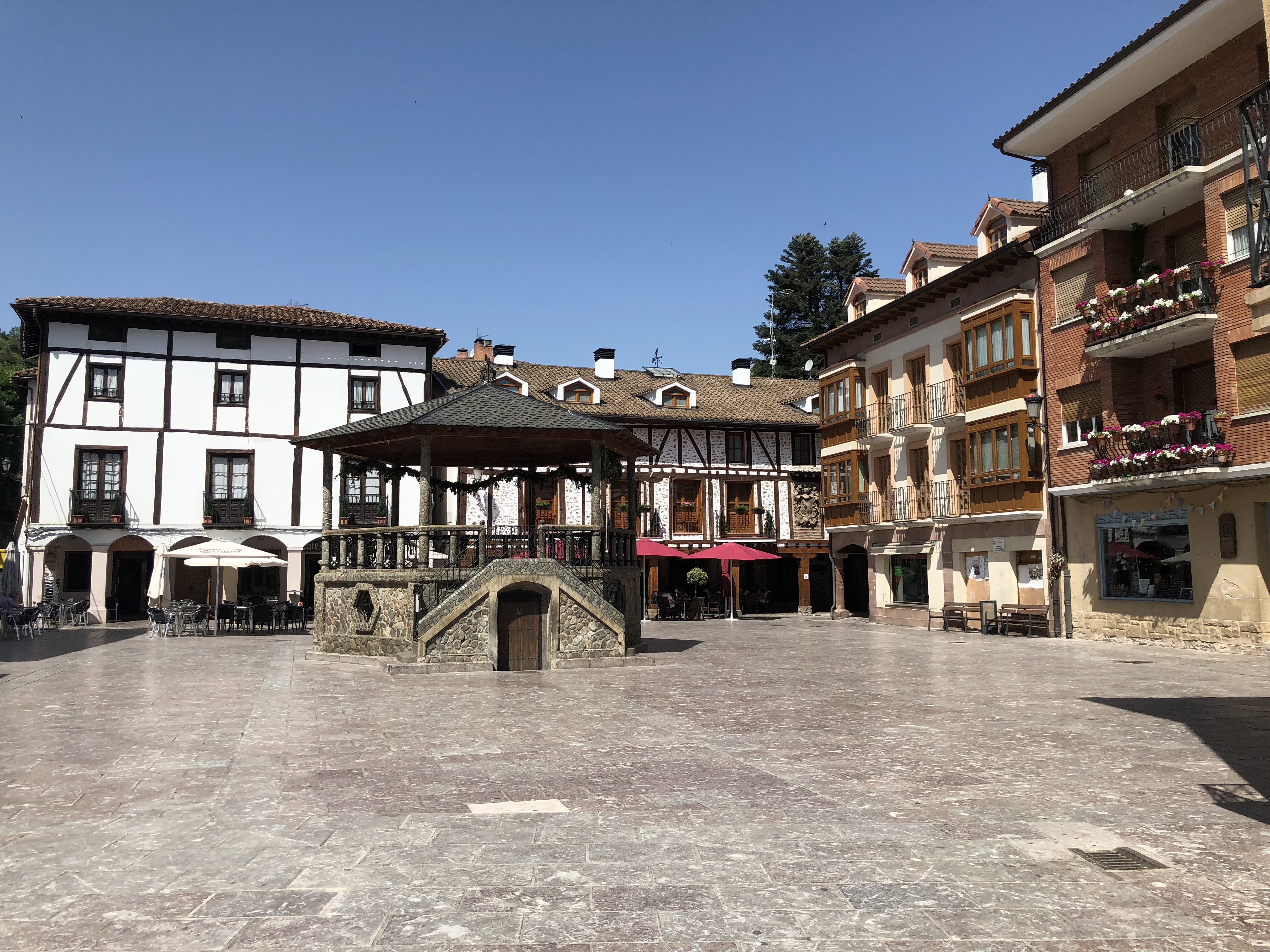 My favorite plaza in Ezcarey

But as we motored into La Rioja, we were so excited to explore smaller rural villages with their cobbled alleyways, medieval walls and old towns, and beautiful churches. We headed to an apartment in Santurde de Rioja, a tiny town that was quite interested in our arrival (the cats of the town and the people, both). The apartment was a home base for exploring the wineries in Haro and the magical little town of Ezcarey, which I loved. 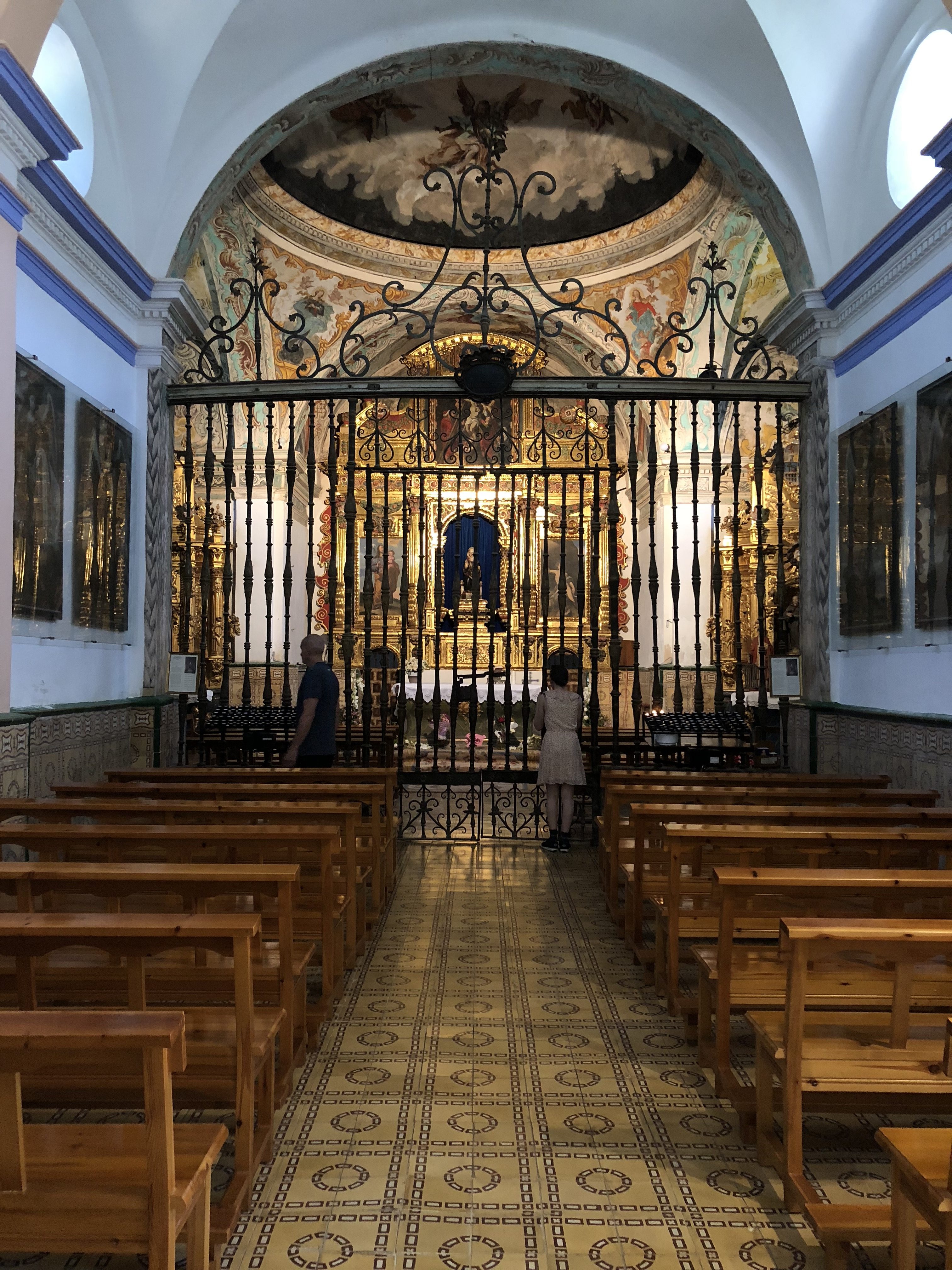 Ezcarey church on the hill

We spent time at the cafe (herbal tea or wine for me, cider or vermouth for Phil, pineapple juice for the kid) and walking around the town. We took a lovely river stroll and hiked up to a small church on a hill that was beautiful. 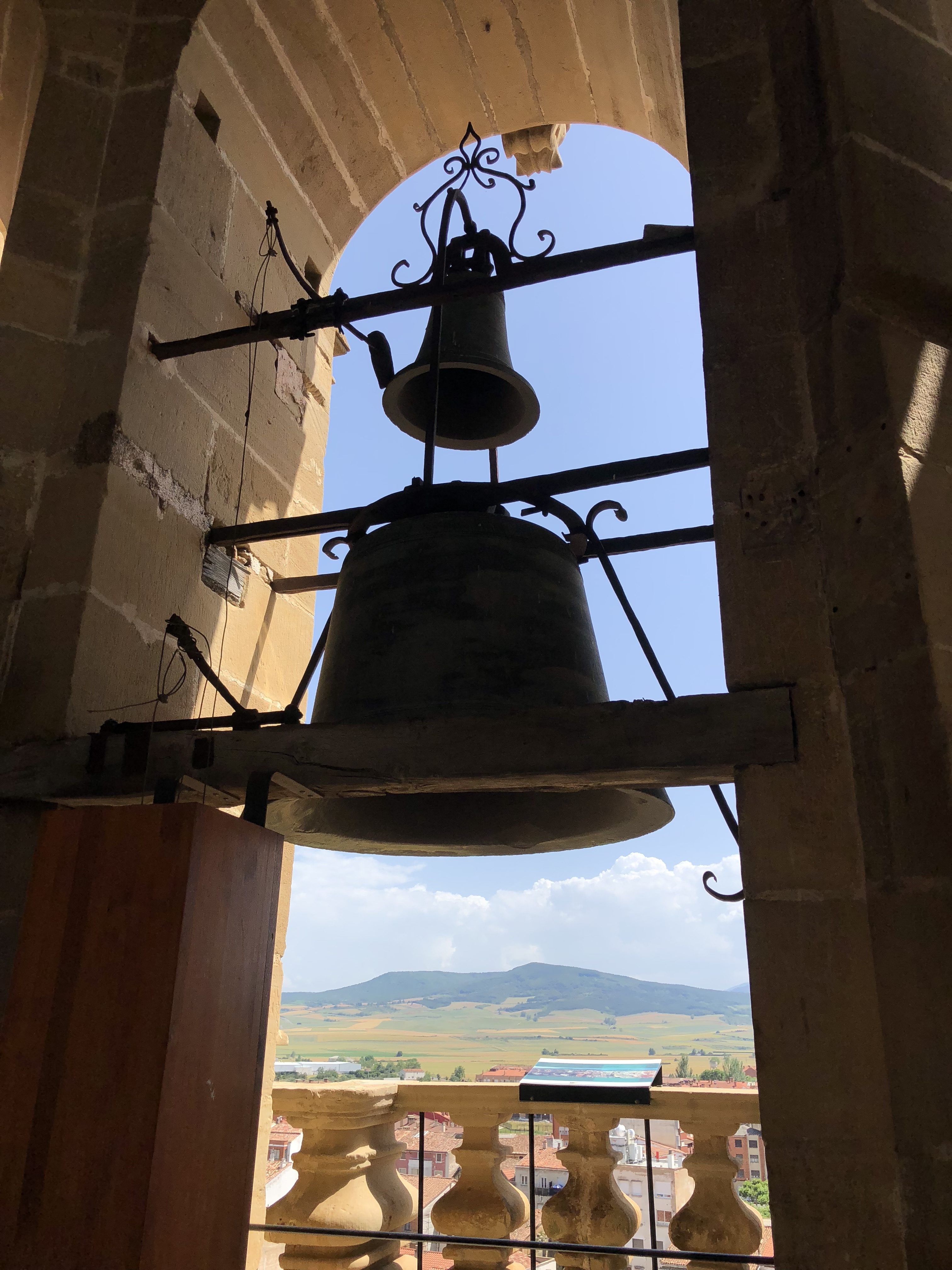 Bell tower. There were four of these bells. LOUD bells. 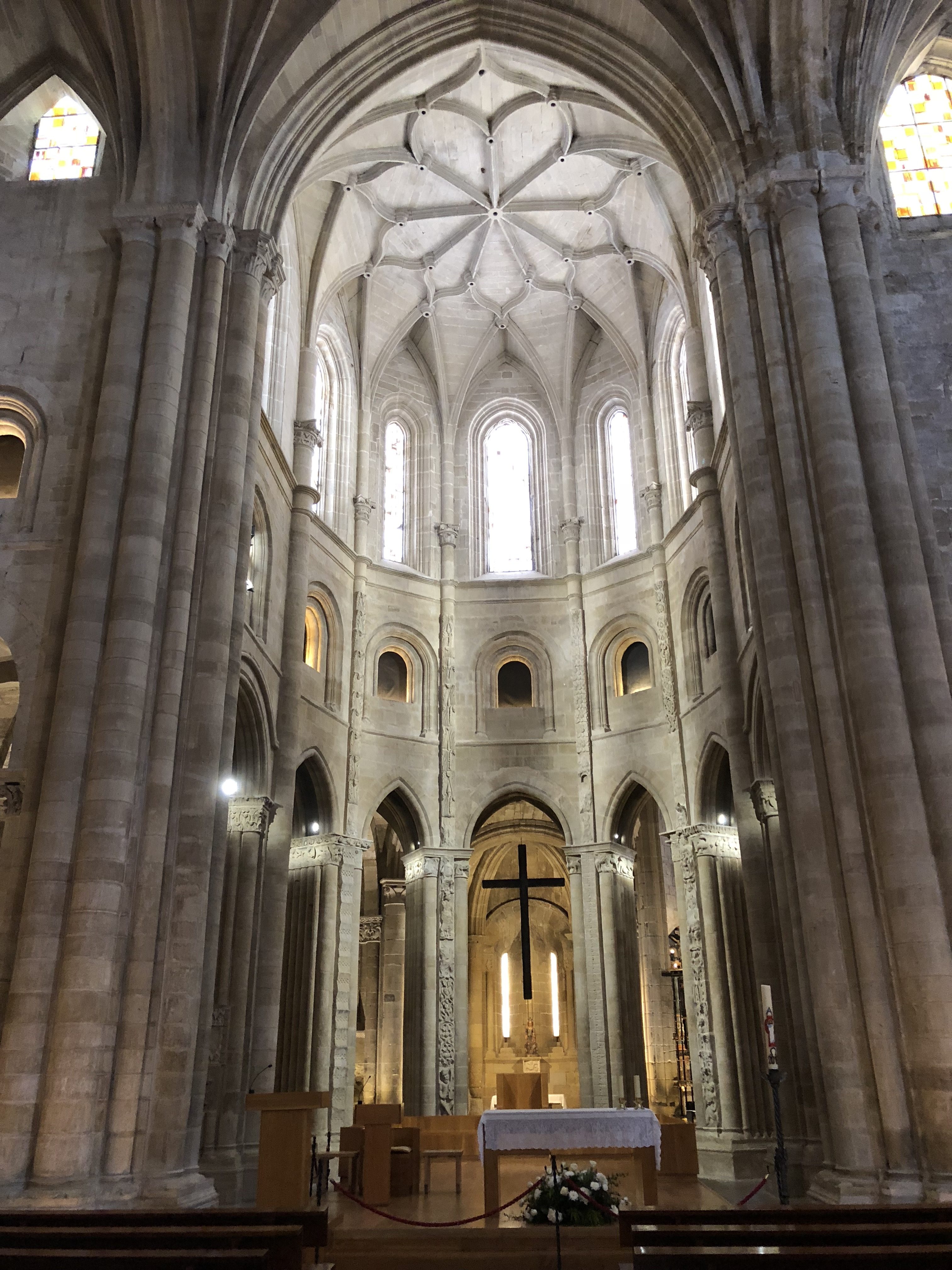 Just north of Santurde de Rioja was a town called Santo Domingo de la Calzada, which we had not planned to visit. We ended up at the supermarket there one day, and picked up some literature at the tourist office. Turns out, it was a history-rich town, and we found some amazing things to check out. First up, we climbed the tower at the center of town. 138 stone steps, and I was hell-bent on getting my yearly workout so I flew ahead and poked my head out into the bell tower just as the bells chimed and it nearly deafened me and my nerves are still recovering so the bottom line is don’t exercise. Gorgeous views all around the town, and of the cathedral next door. The cathedral, built starting in 1158, had a great story attached to it. A German Pilgrim en route to Santiago (and we saw many Pilgrims hiking the Camino de Santiago throughout our trip) stopped at a nearby inn with his parents. He was wrongfully accused of a crime (he was framed by a lover he refused) and hanged, but when his parents returned to the town weeks later, he was miraculously alive, swinging from the gallows, claiming that Santo Domingo brought him back to life. They asked mayor to cut him down and the mayor laughed in their faces and said, “That boy is as alive as these two roasted chickens we are about to eat.” At which point the roasted chickens got up and walked off his plate. They cut the kid down, and ever since, they keep two snow-white chooks (chickens) in the cathedral as a testament to the miracle. 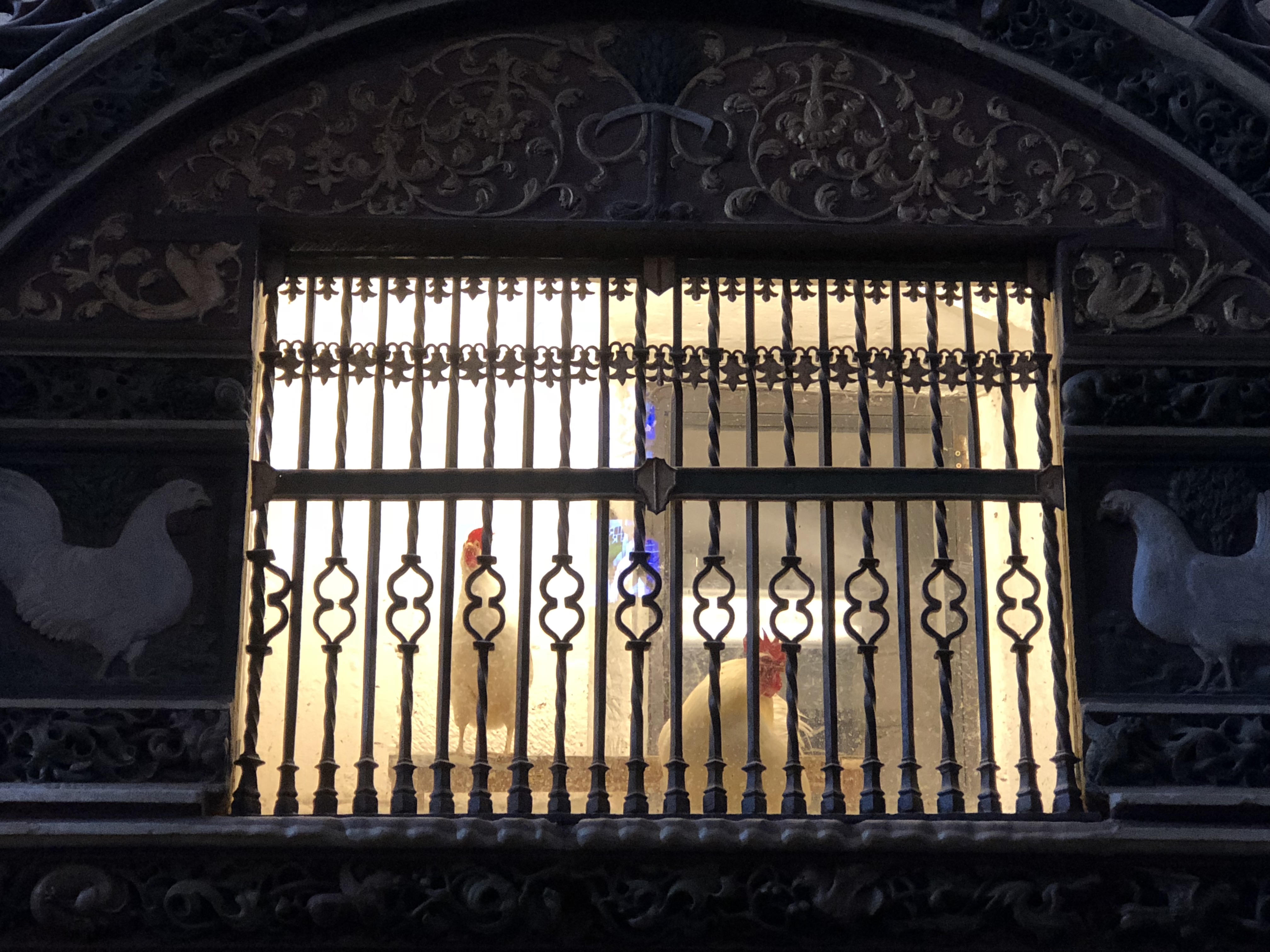 Our next stop was two monasteries in La Rioja, out in San Millán de la Cogolla. Suso was a very early and rustic monastery constructed between the 6th and 11th centuries. Basically it looks like an old stone church with caves where the early hermits lived, and there are some tombs in the burial cave. 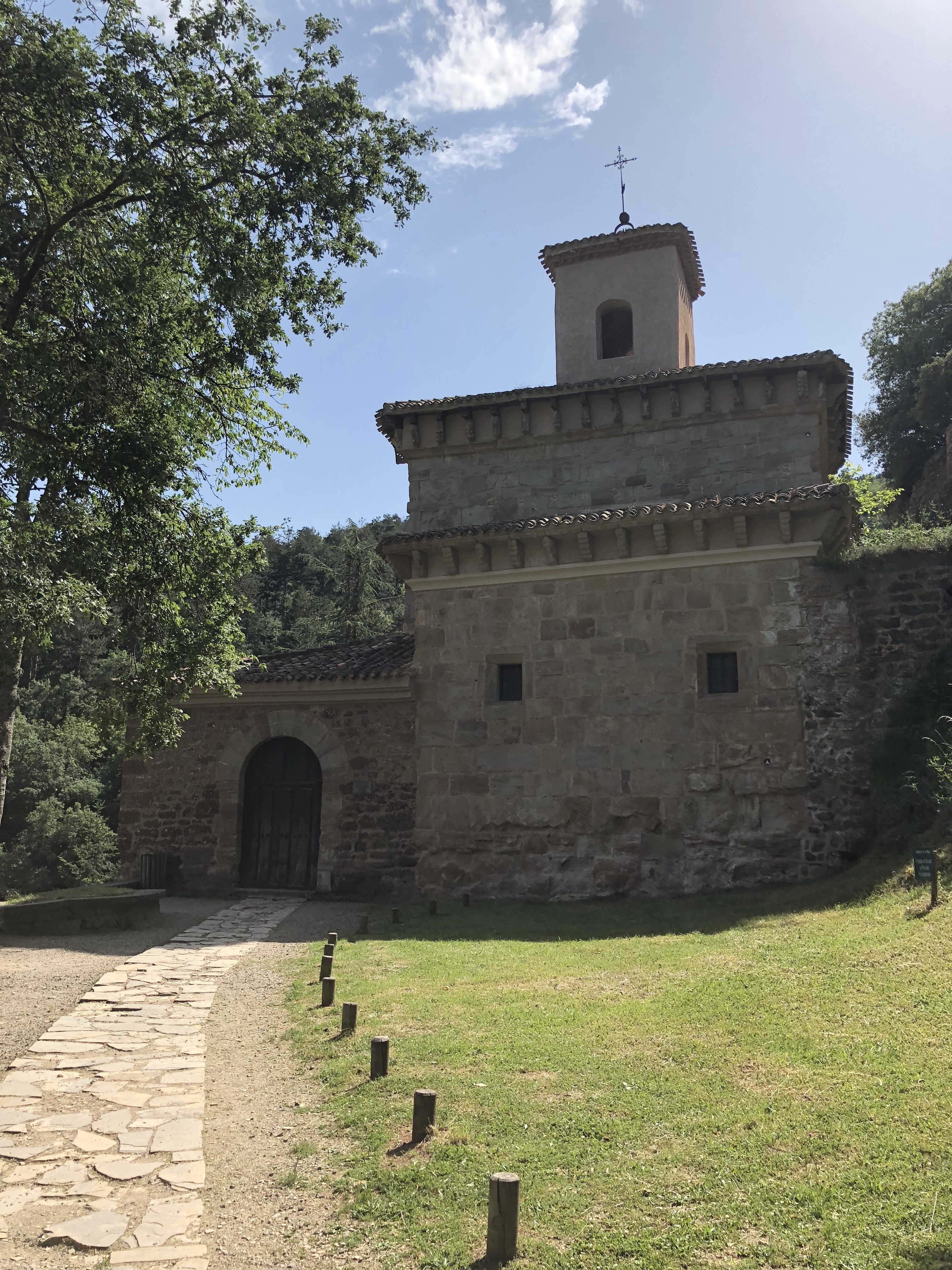 It’s remote, at the top of a steep hill only accessible by a motor coach that you take from the lower monastery of Yuso, which is much more ornate and a bit later in date. When the Saint Millán’s remains were being carried by ox down the mountain from Suso, the oxen refused to go any farther after a certain point, so everything stopped at Yuso was erected to house them. We took a Spanish language tour of Yuso, which was beautiful. Our tourguide was severe and DID NOT MESS AROUND but we actually had a lot of fun with him as we worked to piece together the history with our limited Spanish. The highlight of the tour were the 18th century songbooks: huge, leather-bound volumes kept in vaults that our kiddo was able to pull out on creaking iron wheels. 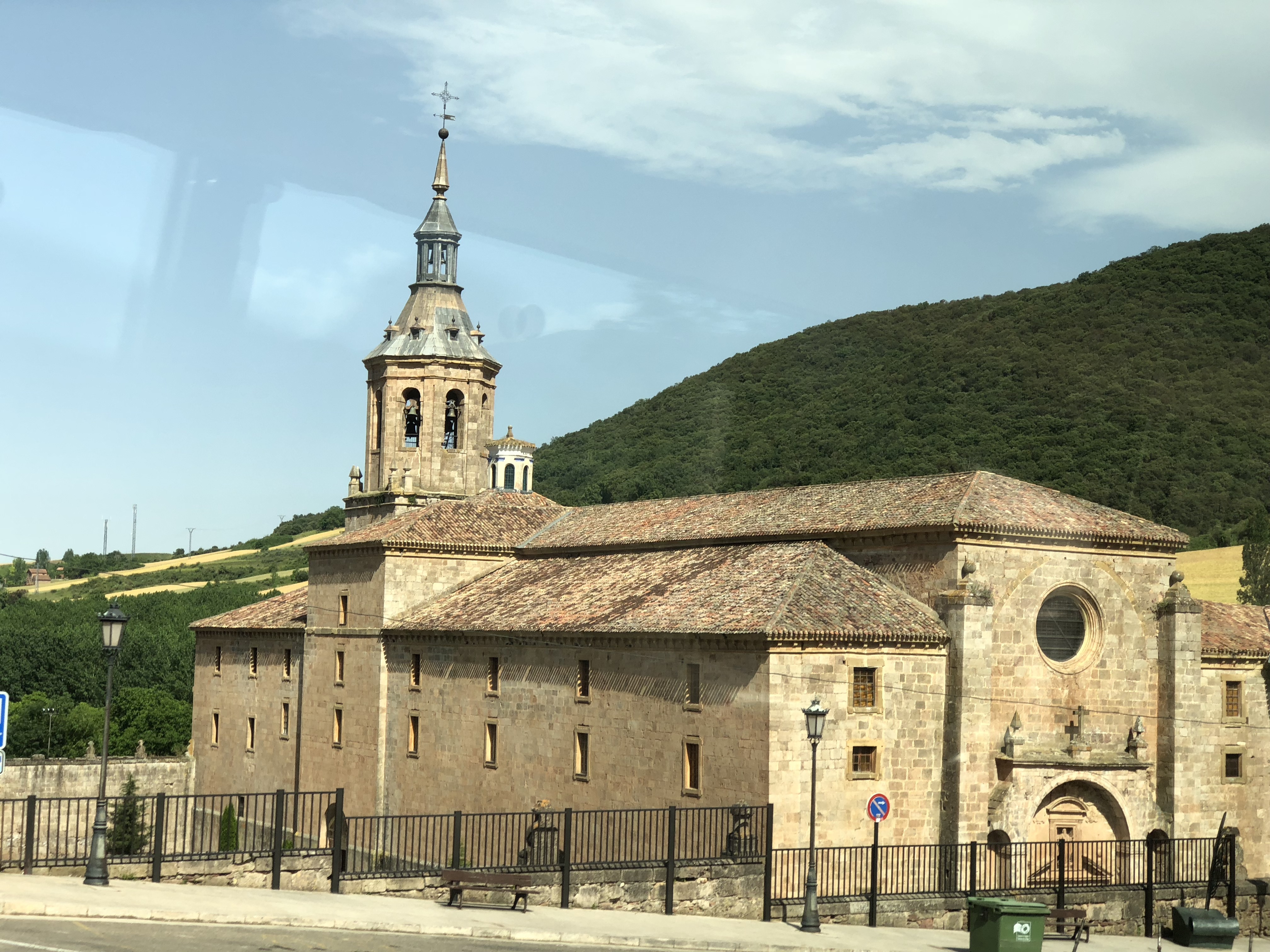 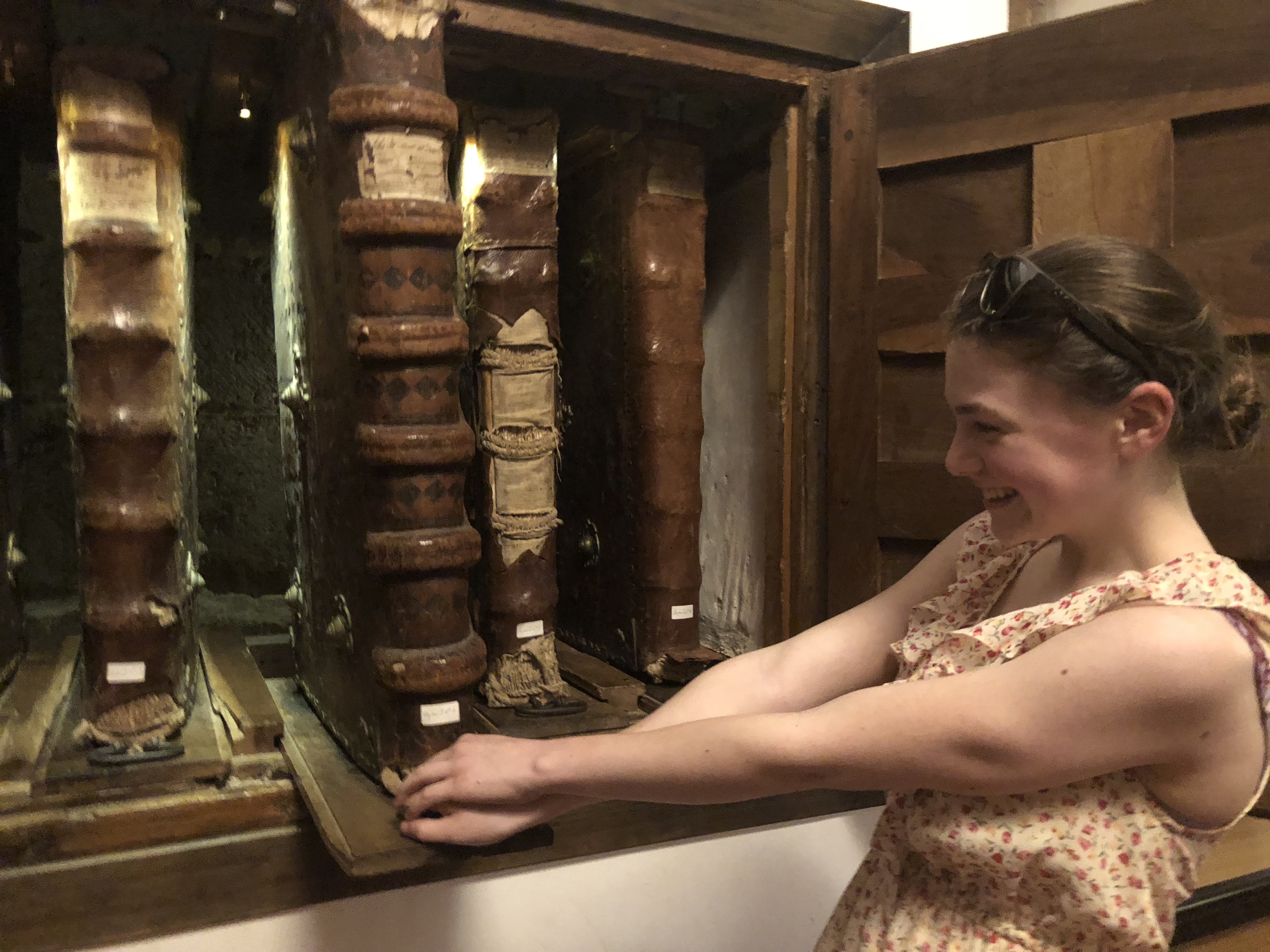 Phil enjoyed a winery tour in Haro, and did some early morning drinking, which is pretty much a norm for the locals here, along with the early afternoon drinking, the evening drinking, and the late night drinking. 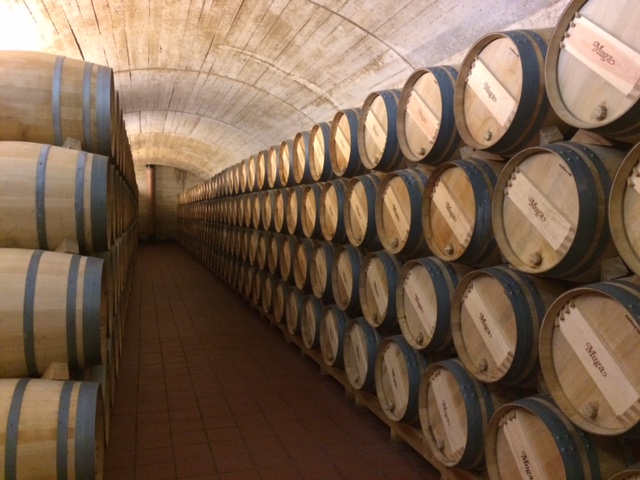 The last stop in La Rioja was dinosaur country. The kid has a thing for fossils and bones, so we drove through some pretty cool landscapes to get to the region where there are many dinosaur footprints preserved like fossils in the earth. We were surprised at the mesas, the red soil, and the caves built into the sides of mountains, many of which were being used as residences. 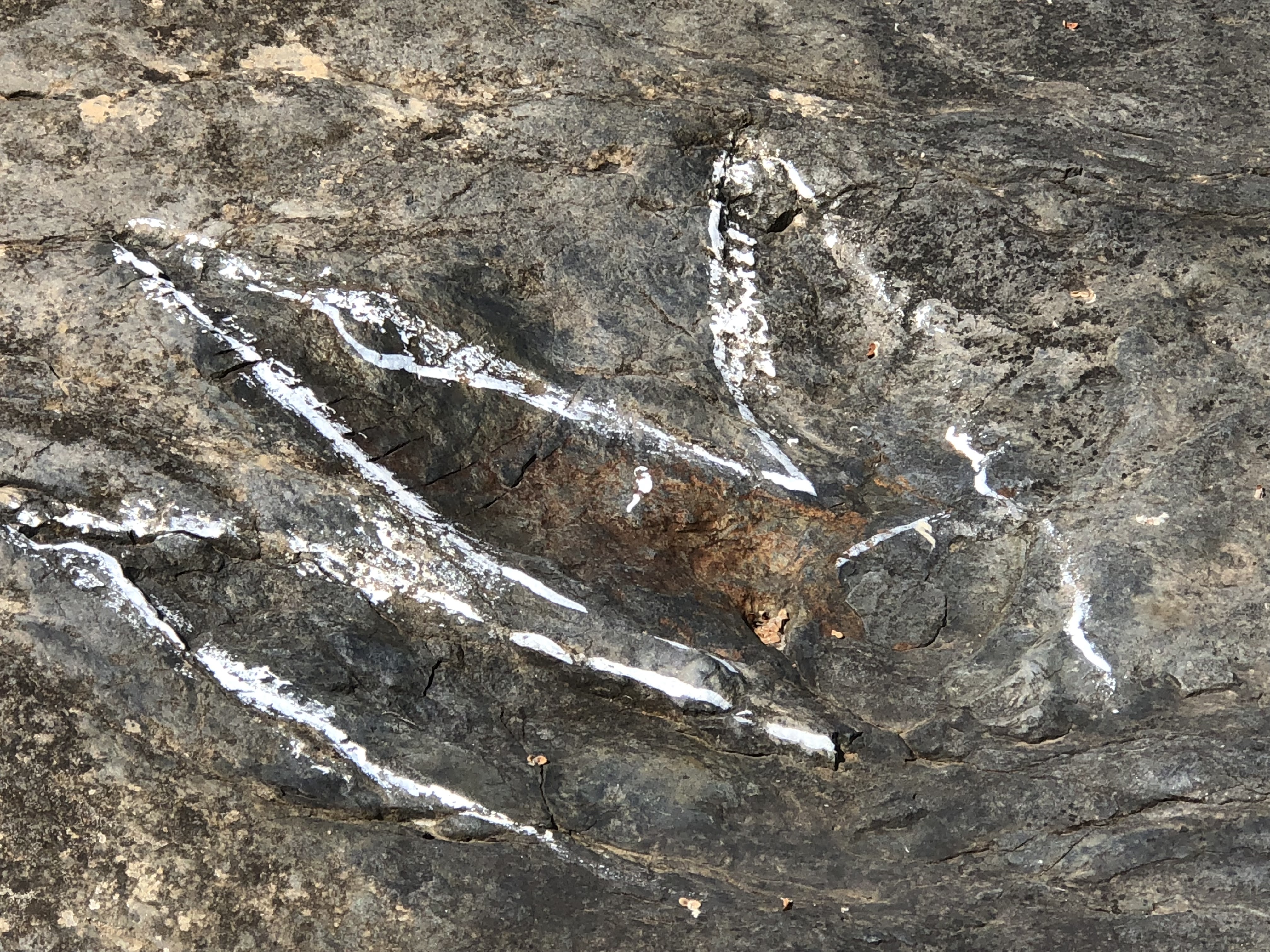 We went to Enciso, and the footprints were definitely cool (especially because they are pretty much just out there, with no fanfare or tourist apparatus, unless you count the weird Jurassic Park-like playground park behind ginormous wooden fences with weird noises coming out of them…), but the small town of  Arnedillo on the way over was the part I really loved: a small hill town with a great cemetery, a gorge, and a fine picnic spot. Discovering small towns along the route was really the best part of every adventure. 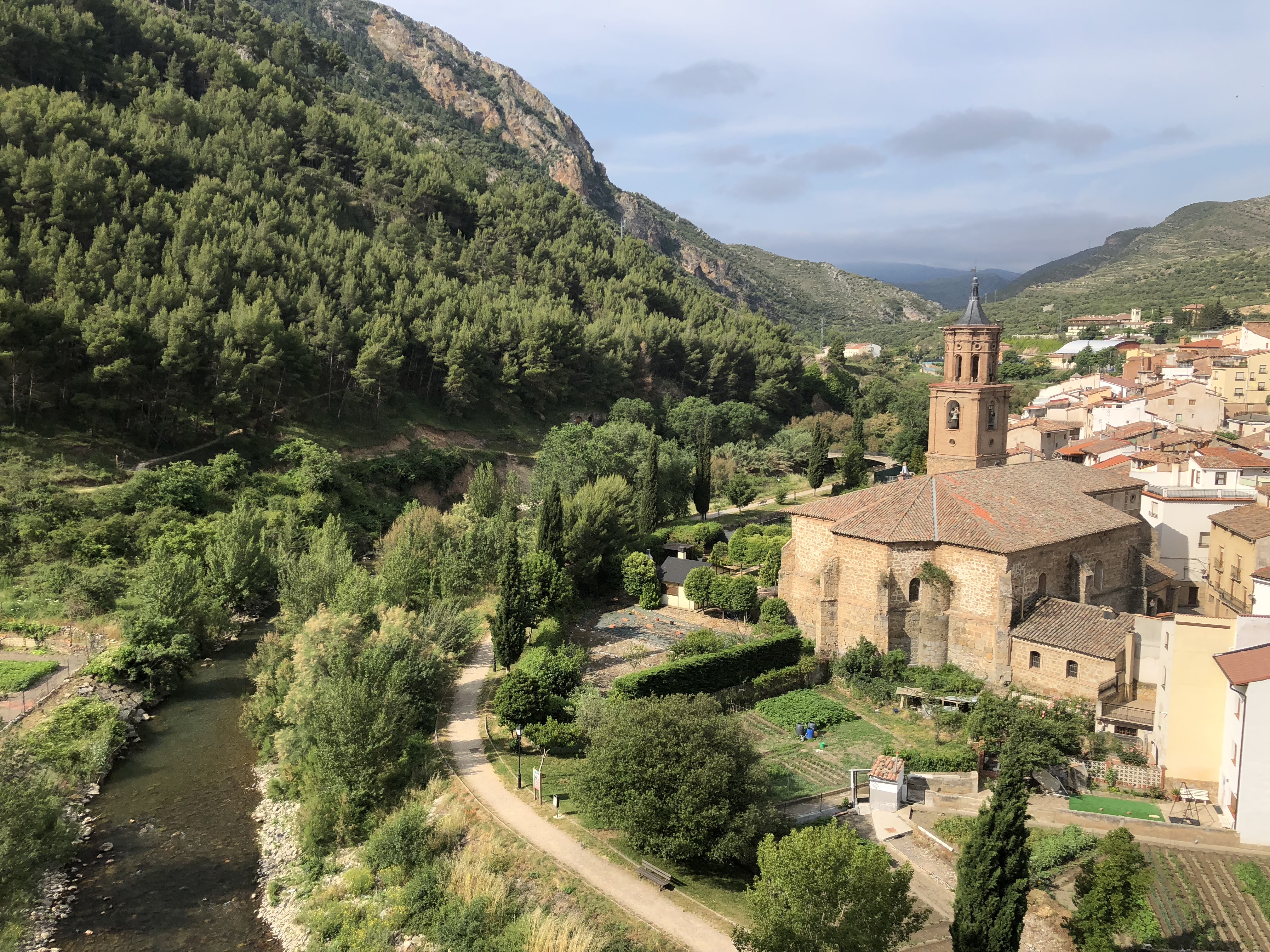 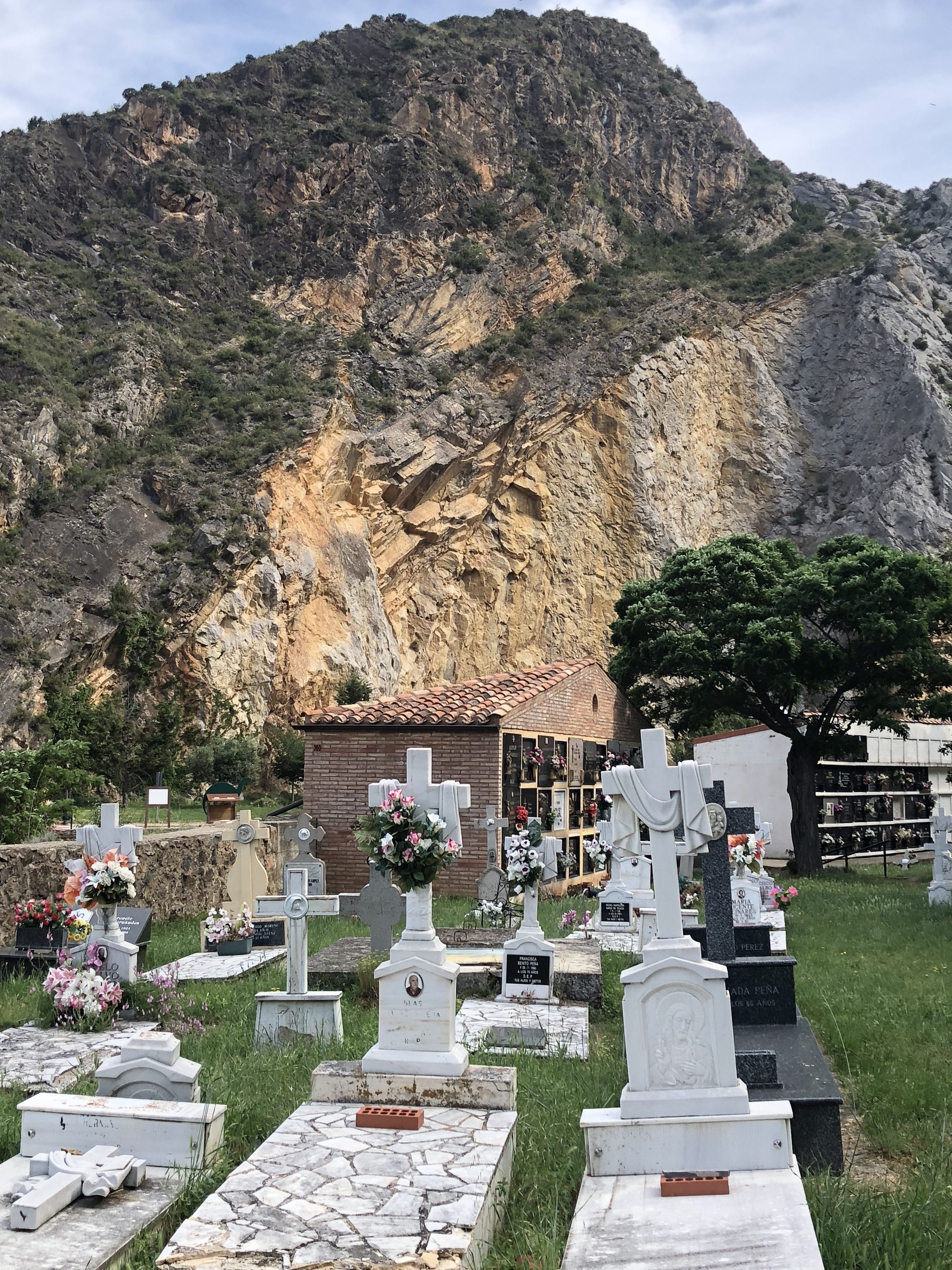 To read about how this all started, check out the beginning of our journey. Otherwise follow us to the next stop: Olite in the Kingdom of Navarre.