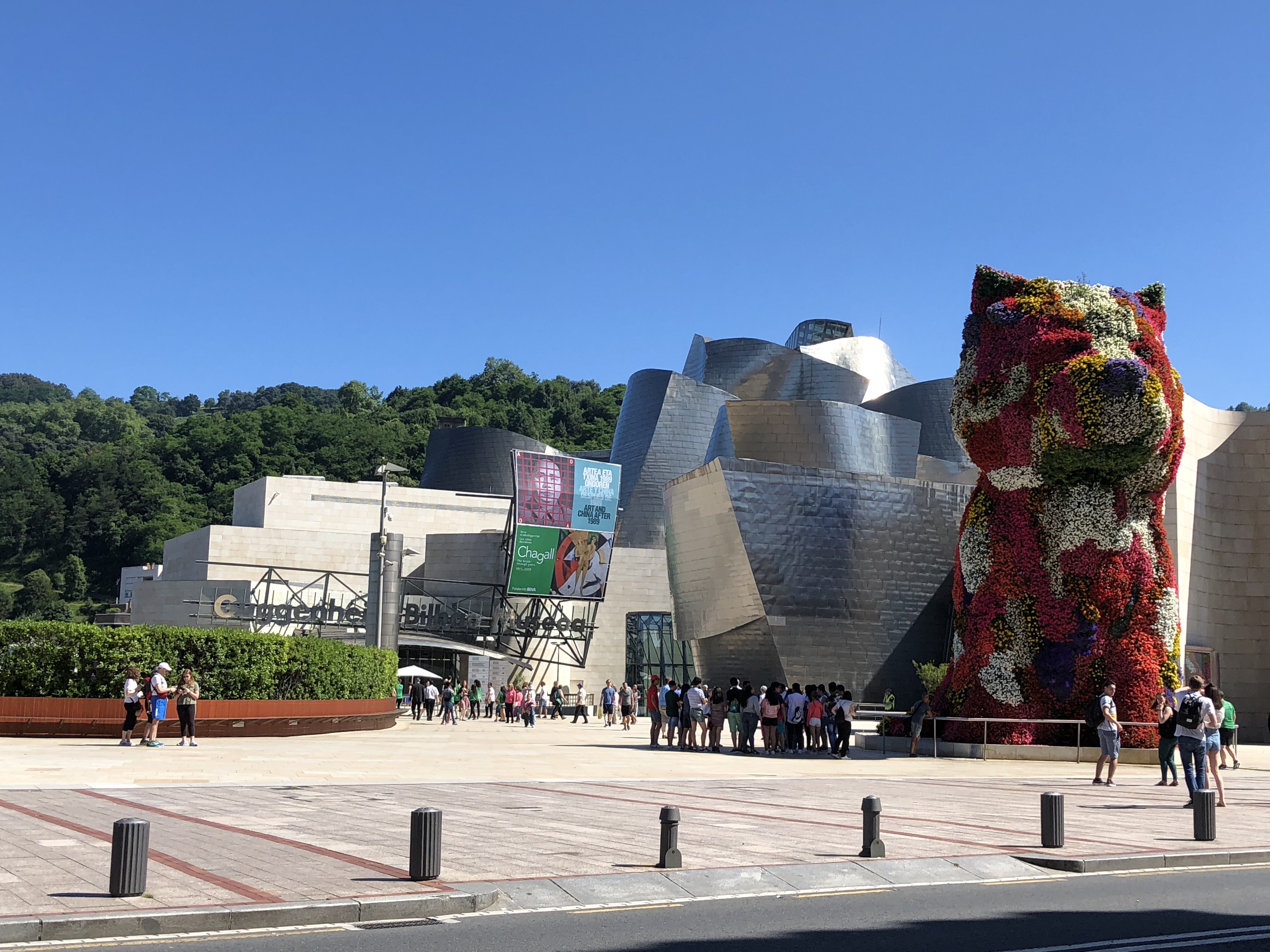 We were sad to leave our place at San Vicente de la Barquera since it was so perfect, but we were excited to continue exploring the coast. We made a quick stop in Bilbao to see the Guggenheim on our way to our next apartment. We were completely bowled over by the architecture at the Guggenheim, and Phil was stoked to see the Richard Serra exhibit after years of appreciating his work through books and websites. I loved the outdoor exhibits (even the Jeff Koontz pieces were fun to see, despite the fact that none of us considered ourselves true fans). We enjoyed getting our car stuck in a parking garage when we ran out of Euros, they didn’t take credit, and we realized that there was no way to get any cash (my local bank cut off my bank card, it was Sunday, and I had no PIN for our credit card). 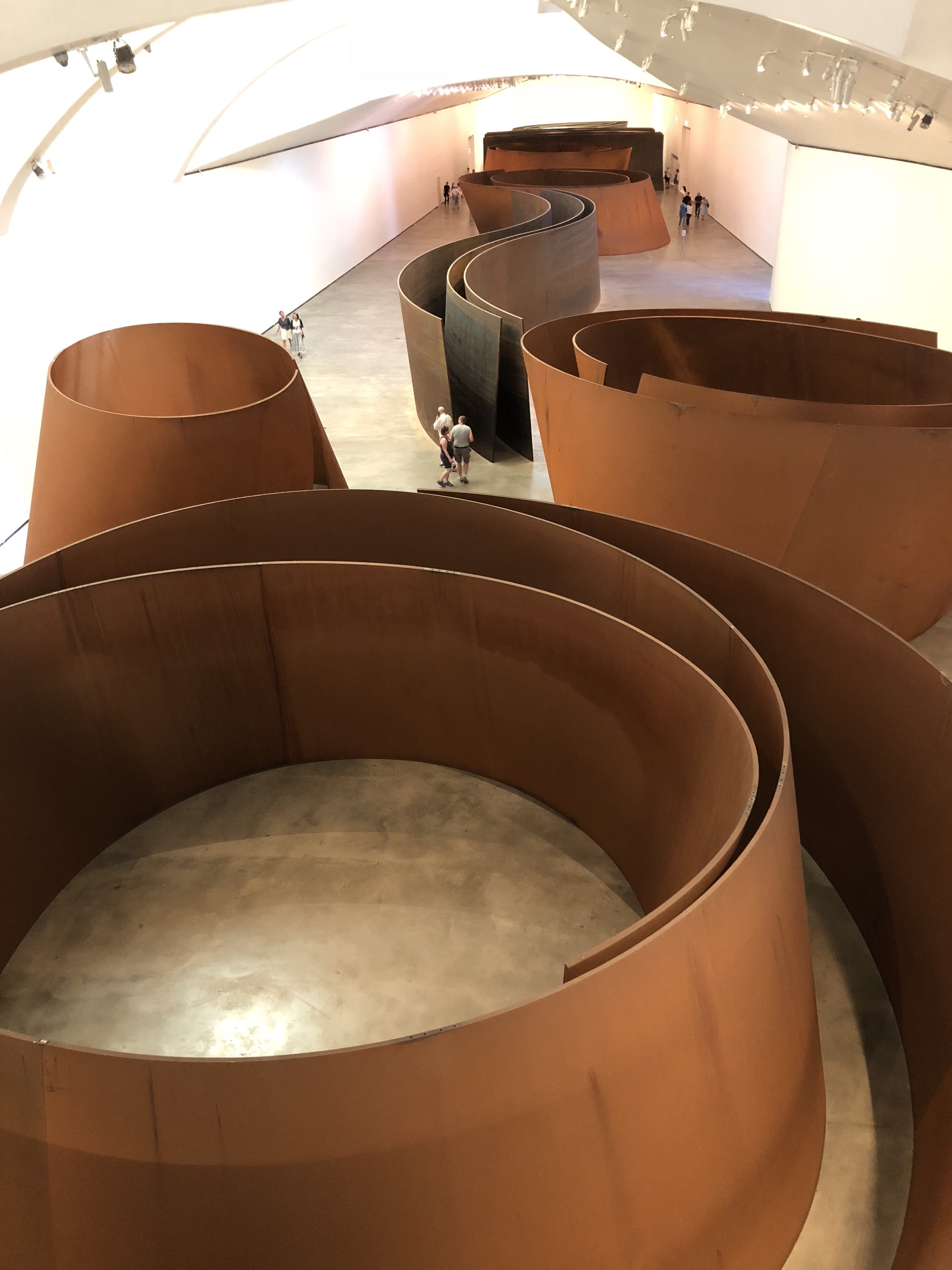 We navigated that ok, but had our first glimpse of how easy it would be to get into trouble if we were too casual about planning. But we finally freed the Fiat and hit the road for the coast.

Our next stop would be the town of Andoain, which we would use as a home base for exploring the resort city of San Sebastian, which was a “not not miss” stop according to everyone who advised us on the trip. We pulled into Andoain and were greeted by our host, Joseba, who had a small studio apartment. 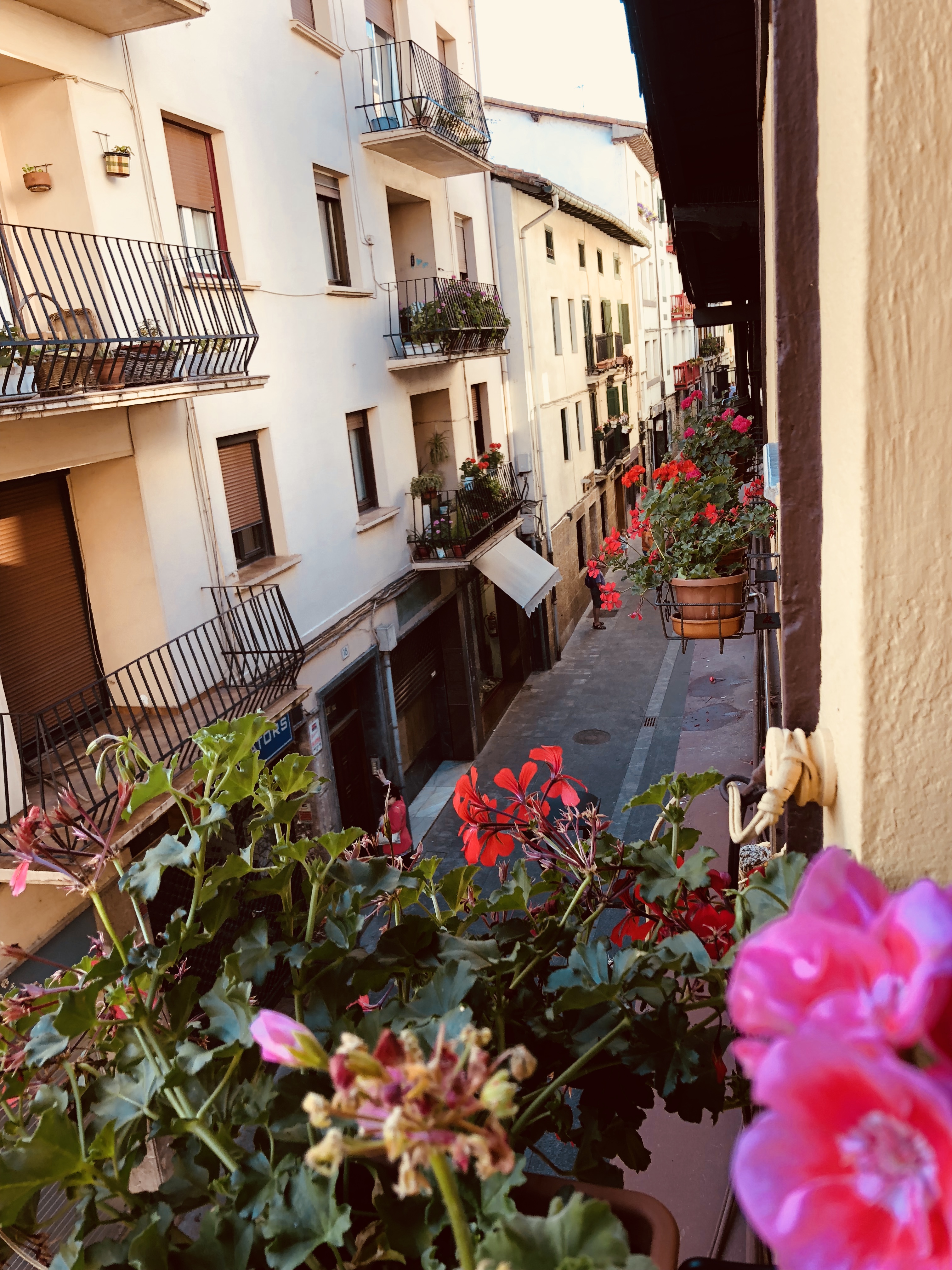 Deep in the heart of Basque country, Joseba was a surf instructor who was happy to advise on our next day’s San Sebastian outing, but he was adamant that we not miss the local festivities for the solstice that were happening locally in Andoain that evening and the next day.

We were so very lucky to catch the San Juan Bezpera festival, which featured a professional bike race, feats of strength like wood cutting and tug-of-war, and Basque music and dancing. And lots of singing and drinking. All. Night. Long. Under our window, in the streets, and basically everywhere you looked. So much fun! 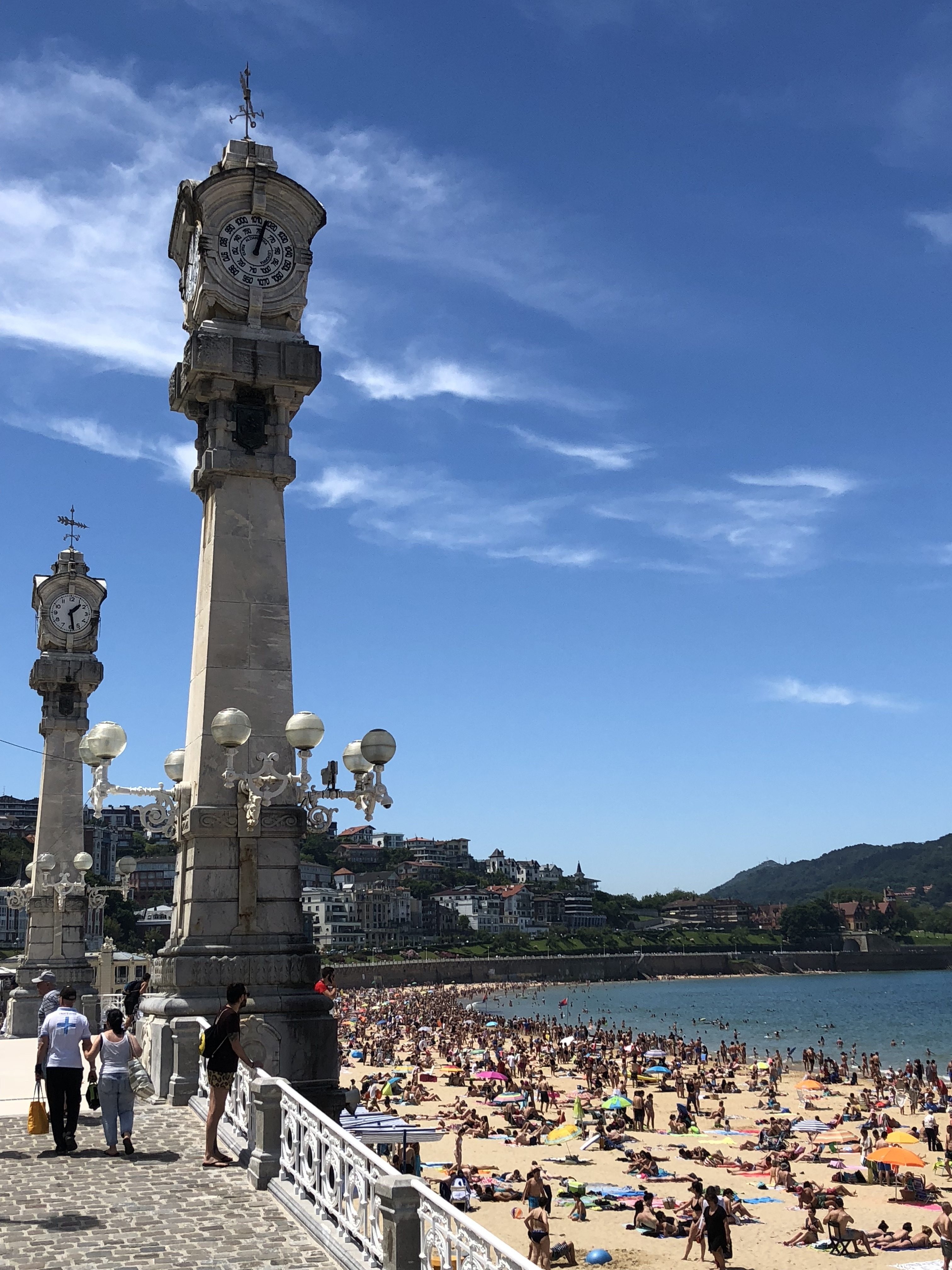 San Sebastian was another universe from the local culture of Andoain. So far in the trip, we could count on two fingers the number of Americans we’d encountered (aside from in Bilbao), and on one hand the number of Brits. But San Sebastian was a totally international melange. It felt like a mix between Cannes and…well, some other international seaside resort playground…I have no idea. We enjoyed the beach, we took the funicular up the mountain to an amusement park with a killer view, and we enjoyed gelato. We basically pretended we were highly wealthy and cosmopolitan people, though it was easy to have a great day without spending more than a couple of Euros. It was gorgeous and like nothing I’d ever experienced. 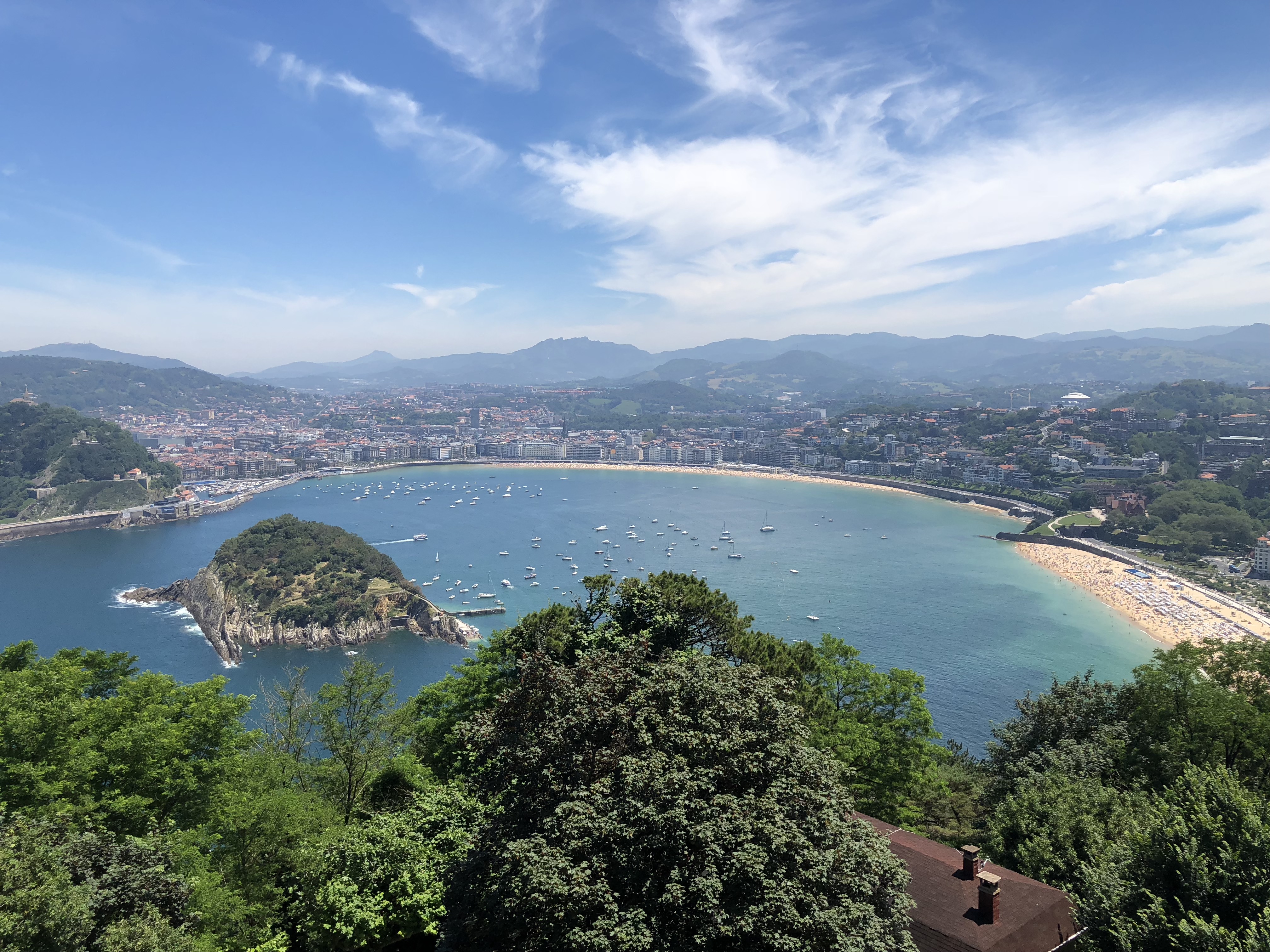 Looking down on San Sebastian

So the day was magical. Perfect. And we made it back to Joseba’s. And then the kiddo didn’t feel well. And then Phil didn’t feel well. And then we had the scariest experience. Food poisoning. (Likely from a single peach, by the way, shared between Phil and the kid.) It sounds somewhat banal, but I assure you it was terrifying. The kiddo was as violently sick as I have ever witnessed anyone be. Joseba was at our side in 5 minutes. I want to stress that we met him just the day before, through an online apartment rental company. He was not our friend before that. But he rushed to the apartment, and realized we had an emergency. He called a doctor who came to the apartment, and he stayed with us for an hour translating. The doctor examined Phil and he was ok (in pain, but ok), but she quickly realized the kid needed an ambulance, and before long, Kiddo and I were in the ambulance on the way to a local hospital. Joseba went to the pharmacy to get Phil’s medicine and help him, and I did my best to manage the Spanish as the kid was given serious IV medication and fluids. 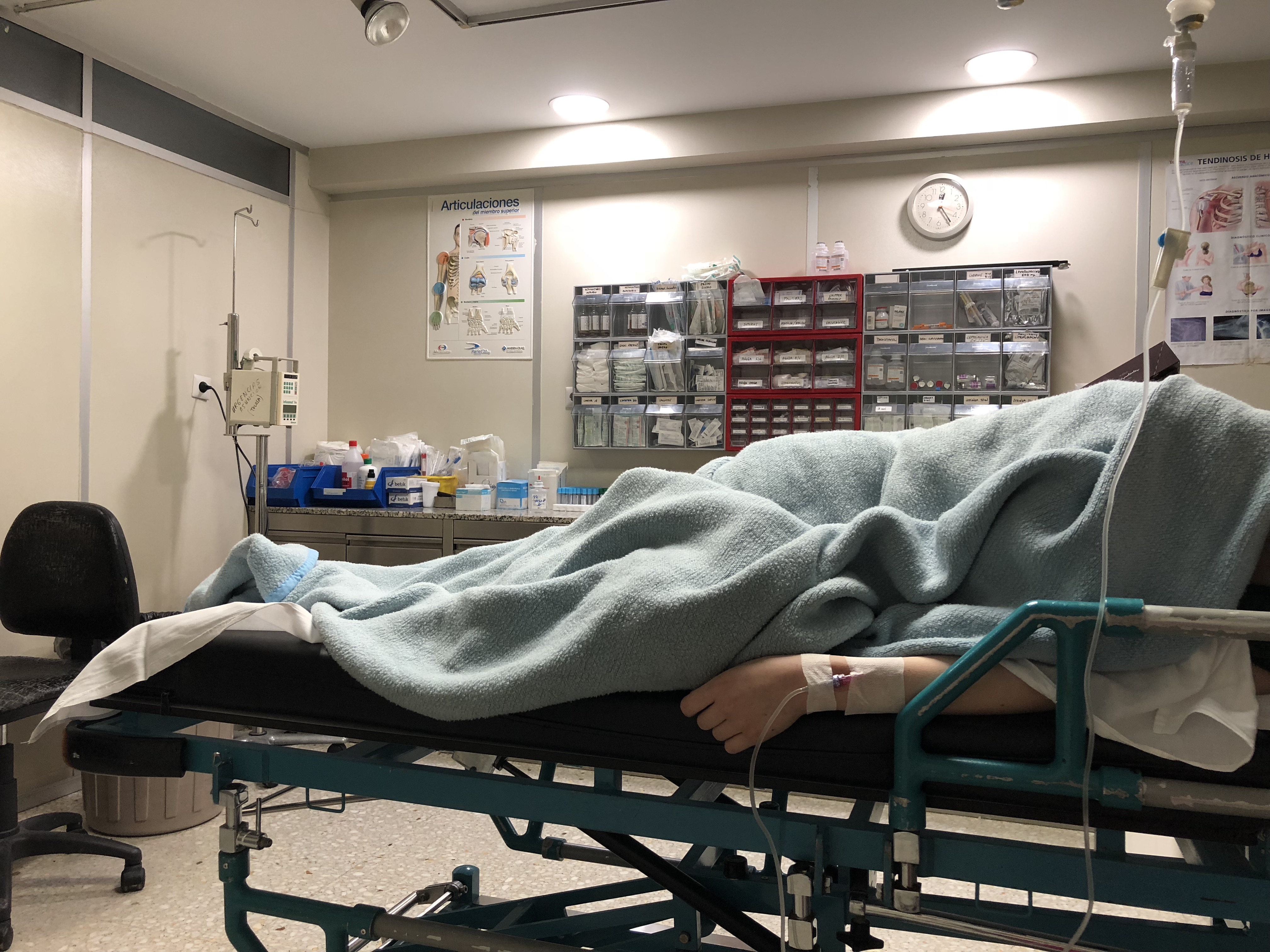 The hospital was not very well-equipped, but the people who cared for our child– most of all Joseba who was a godsend– made the difference, and I am honestly not sure if she would have survived if we had not had the help we had from Joseba and his neighbor, Mila, from the local doctor, and from the ambulance staff. I won’t go into detail, but the experience was traumatic and beyond anything I could have imagined. Mostly what I realized is that the most important thing we have to save us on this planet is the humanity of strangers. It was a profound 24 hours, touch and go, filled with lessons I didn’t expect to have to learn.

The whole thing lasted less than 24 hours, and then everyone was completely recovered and ready for our next adventure. Well, everybody but me. It’ll take me years to get over it. But mostly, I ended up with the standard feeling of this trip: boundless gratitude.

To read the first installment in our journey, head back to the beginning. Otherwise, head on to the next leg, as we cross into La Rioja.