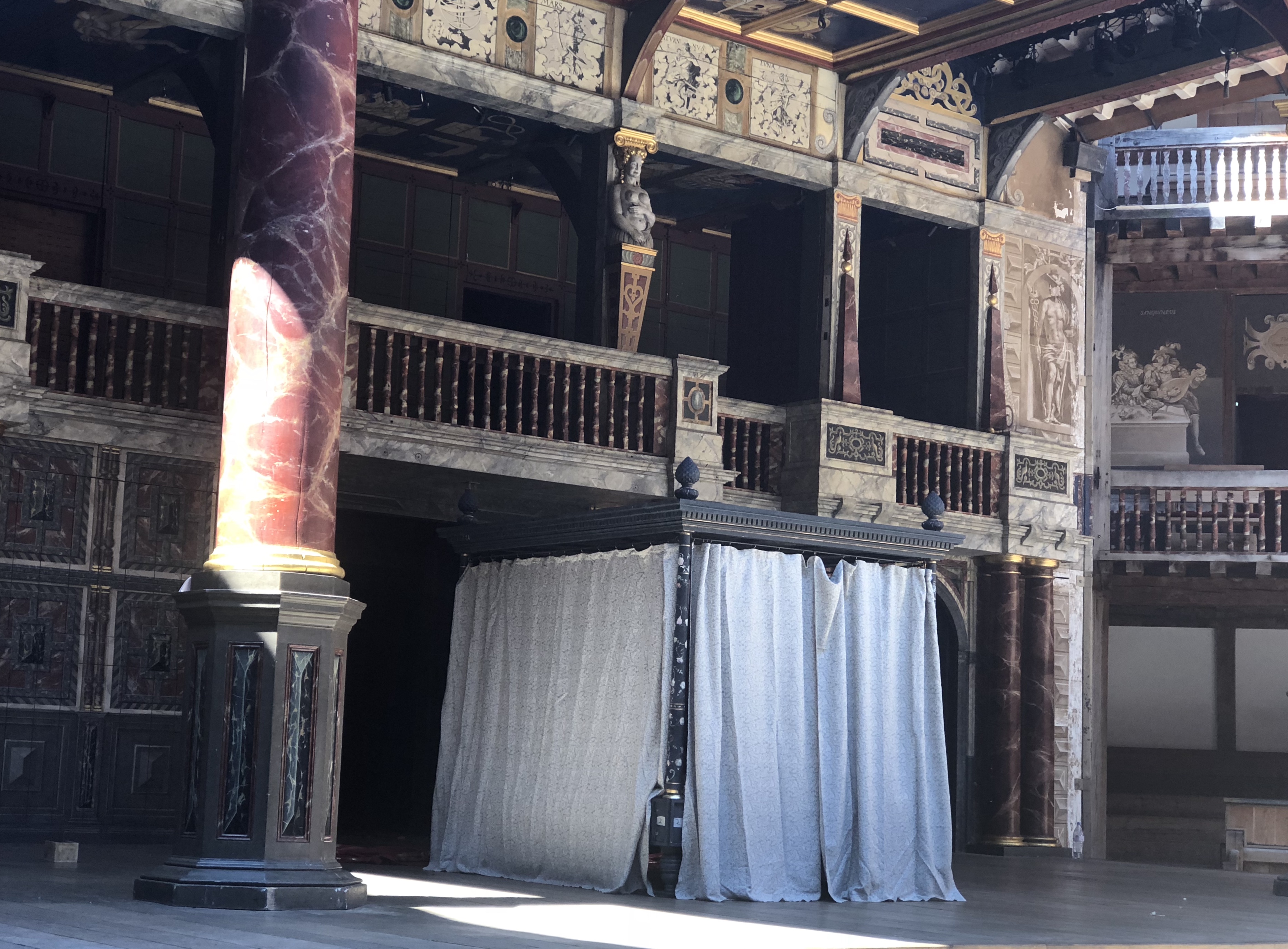 Stage set for Othello at the Globe

When I realized that we had to stop in London for a layover in order to get cheaper tickets to Spain, it seemed only reasonable to extend that layover a bit so we could enjoy the city. Airfare being the nonsensical thing it is, it was cheaper to stay five days than to stay just a couple once we weighed out the flights and hotel. So there we were in central London with no itinerary, since the whole thing was kind of an afterthought to the Spain trip. London turned out to be, unsurprisingly, spectacular. Phil and I had been before, but it was the kid’s first trip, and that made it all the sweeter.

We arrived on the same day as the Trump baby balloon, and we found ourselves carting our luggage from Stansted to our hotel, criss-crossing the fabulous protests that welcomed the actual Trump baby. We committed as a family to apologizing for America and faking Canadian residency as needed (ha).

Highlights in London included seeing the rare books in the British library, a free two-and-a-half hour graffiti and street art walking tour (click the tweet below to see a longer thread of images from our tour– it was amazing!), thrift shop browsing, lunch at Ye Olde Cheshire Cheese pub, a tour of the Globe theater, and incredible Indian restaurants for lunch and dinner most days. We hit the Tower of London, and loved the ravens, but the summer crowds in London are ridiculous, and none of us really enjoy the masses, so we quickly jettisoned all the other main tourist stops and did our own street wandering, which was much better. 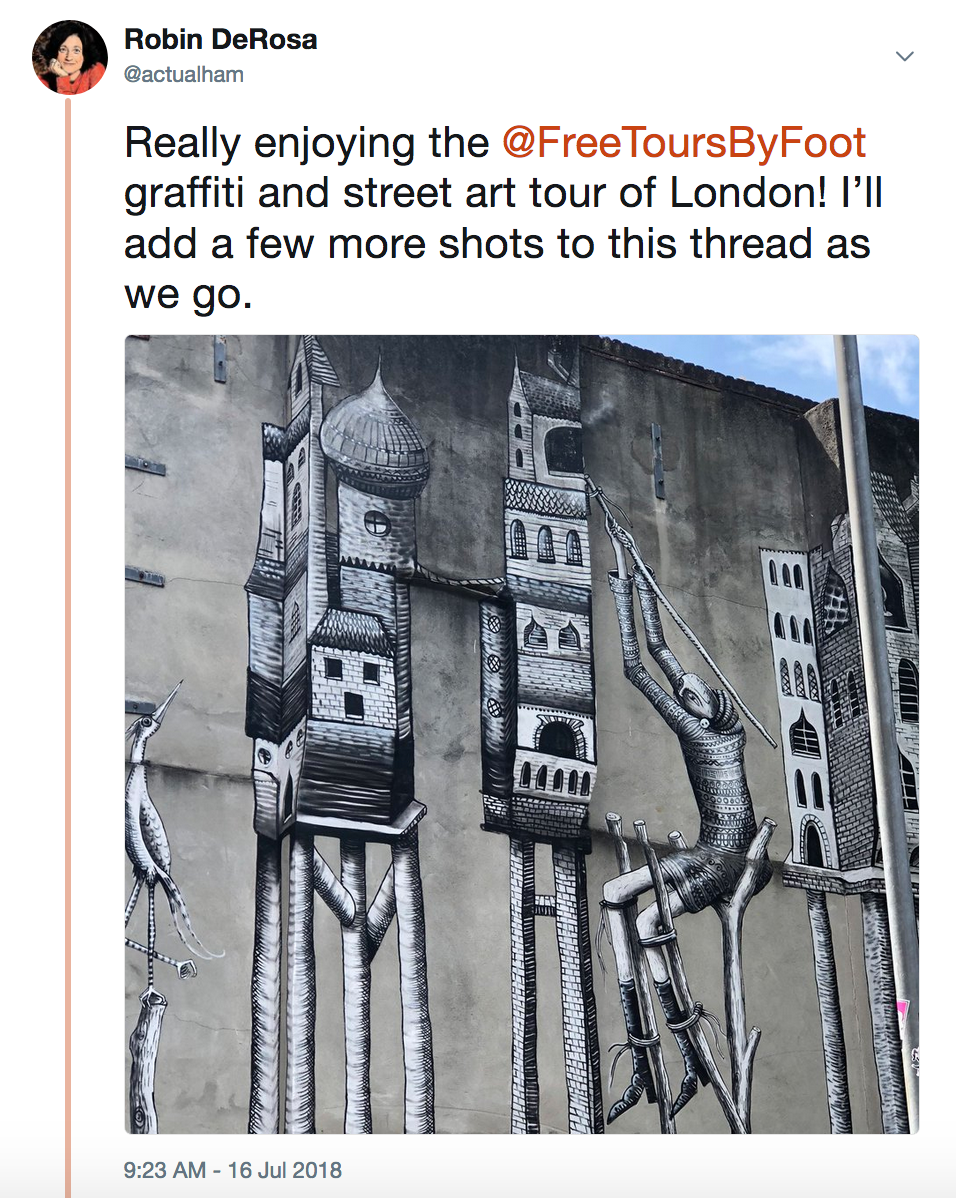 The National Theater’s outdoor arts festival was being run by a local queer club on the weekend we were in town, so of course that was an easy choice. The day started with a drag queen life-drawing class (the kiddo won a great prize package for her work!), and ended with the MOST FUN drag show, “The Sound of Musicals”; we were in heaven.

Kid gets shout-out from Johnny Woo

The show culminated with actual SNOW (it was over 80 degrees outside) falling on us as everybody celebrated inclusion and art in the shadow of Brexit and the Trump baby. It was as joyous as I have felt in years. Here’s one highlight:

We had no intention of topping a free drag arts festival, but one of my Twitter friends (shout-out Krista Lambert!) had responded to my call for low-cost London things-to-do with a gem. She told us that because ticketing laws in London prevent resale and price gauging, it’s possible to get last-minute low-cost tickets even to Hamilton. I did not get my hopes up, but on our final evening, three 6th-row-center seats came available for less than the cost of one ticket for the touring show in the U.S. We all knew the show would be great, but I think we were completely overwhelmed by the brilliance and the timeliness and the talent and the full-on experience of the whole thing. Jaw-dropping is a fair assessment.

And so, dear reader, we ended out trip thusly. With gratitude and new ideas and fresh energy. Such a big world out there, so good to be out in it. Thanks for reading!

To read about how this all started, check out the beginning of our journey!

If you enjoyed these posts, please consider making a small donation to your local public college or university, earmarked for study-abroad scholarships for low-income students. We would like to extend the kind of opportunity and lessons our daughter learned while traveling to others whose families can’t afford to fund such trips. If it’s easier, you can also donate to the Fund for Education Abroad (FEA), which provides scholarships and ongoing support to students who are underrepresented among the US study abroad population: “FEA makes life-changing, international experiences accessible to all by supporting minority, community college, and first-generation college students before, during, and after they participate in education abroad programs.”