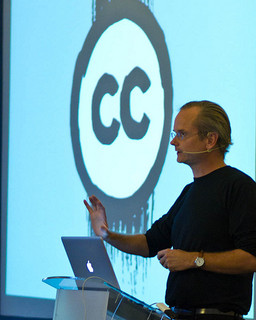 It was inspiring, and I found myself reevaluating my goals as an academic in much the same way as I did after hearing Cable Green speak at my home university recently.  Both Lessig and Green are Creative Commons guys, leaders in the movement for Open Educational Resources (OER), and both are refreshingly idealist in their approach to thinking about higher education, the public good, and the role of knowledge in the cultural marketplace.  While Green’s talk was pointed about the hypocrisy involved in keeping research– so often funded with public dollars– behind paywalls that exclude all but the most privileged scholars in the world, Lessig asked Americans to take a step back and look at the democratic process that lays the foundation for all decision-making related to the dissemination of scholarship.

We take it for granted that democracy is a beneficial system for “we the people,” and Americans are fond of– if not downright pompous about–passing judgment on other cultures’ political systems for their oppressive or tyrannical methods.  But Lessig points out that American democracy is fatally flawed, and he explains that campaign finance is the root of the problem.  Those active in the movement for campaign finance reform are well aware of this, of course, and most of the peeps I hang out with would be quick to suggest that we should get big private money out of public elections.  But I confess to being sort of uninspired by the cause on the whole, and to not understanding its connection to the OER movement which I so wholeheartedly support.  For those who, like me, understand that campaign funding is grotesquely corrupt but who find themselves more concerned with other causes, I offer this nugget that Lessig shared.  A recent study by Gilens and Page showed that if the economic elite support a bill, the possibility of it passing goes up dramatically.  On the other hand, there is a FLATLINE on the graph for the average voter; the average voter has no statistical effect on the passage of any particular bill, regardless of the numbers of average voters who support it.  They conclude that the average voter has a near-zero effect on public policy.   (That was kind of “holy crap” moment for me.  Or an “A-HA” moment if you need a positive spin.) Everything comes down to whether the economic elite support or block a piece of legislation.  Money buys government, money buys governance.

Lessig calls this “Tweedism,” after Boss Tweed, an ancient Chinese prophet who famously quipped, “I don’t care who does the electing, so long as I get to do the nominating.”  If there are biased filters in place that swing to the wealthy, these filters corrupt the democratic process (elections, representation, etc.) in such a way as to basically undermine the very definition of democracy.

What does this have to do with OER?  Basically, Lessig argues that if we want to revise copyright law, open access to the world of knowledge, and return public education to the public, then we need to start with campaign finance reform.  We can’t change law until we restore a truly democratic political system.  Lessig asks everyone interested in OER and public education to donate 10% of our collective energies advocating for campaign finance reform.  We need to “walk while chewing gum,” which means we need to keep this reform in mind as we go about the specifics of our own political activism regarding the future of education.

This may not have been on my radar before today.  It may not be “my field” as an academic or activist.  But Lessig (channeling the late Aaron Swartz) asks me to think about what constitutes my field as a citizen.  As I work to make education more affordable and to restore the public mission of the public university, I will remember that both of those projects demand a healthy and working democracy, which is not something we currently have in this country.