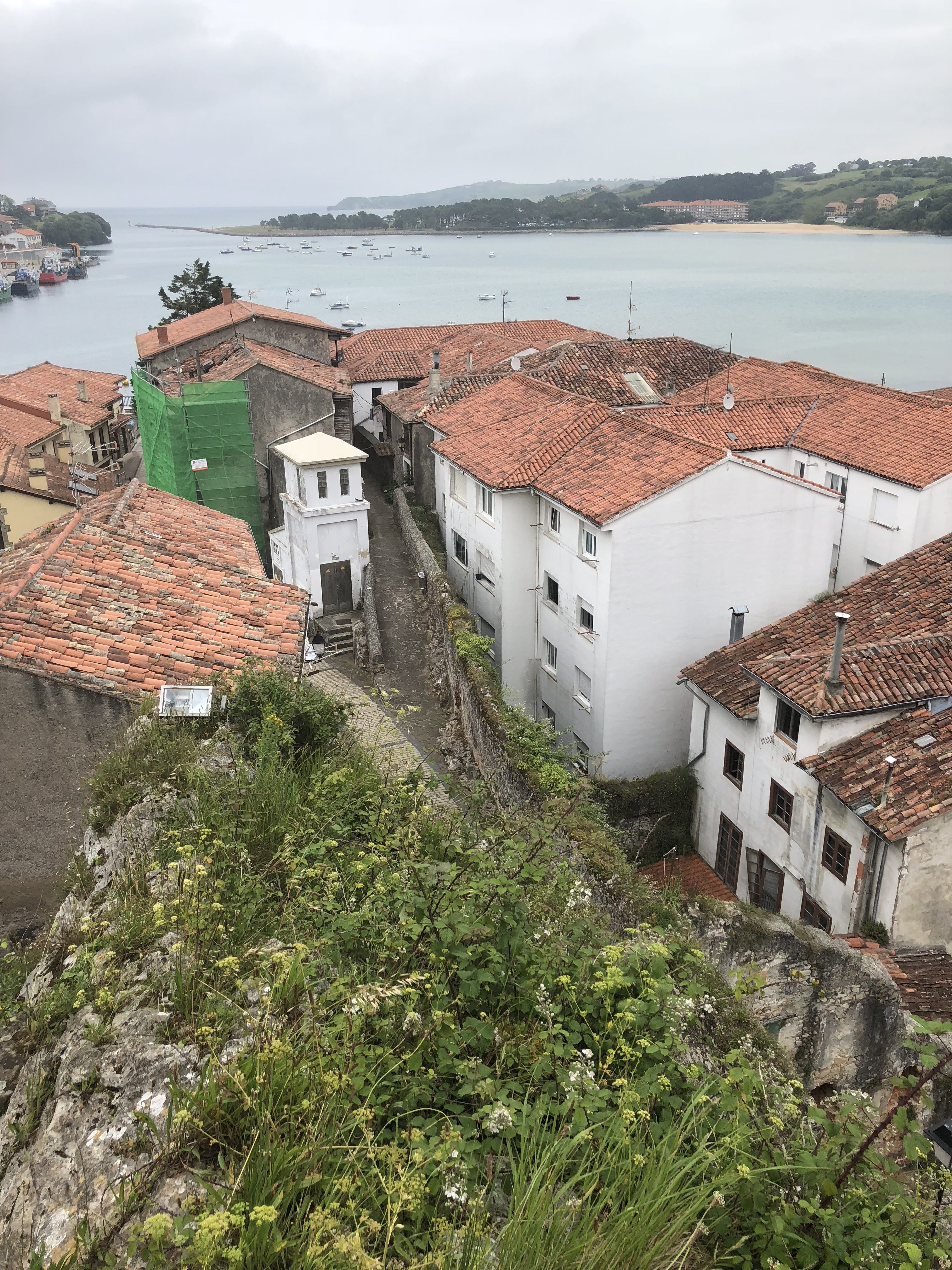 Our apartment is towards the tip of this narrow alley. 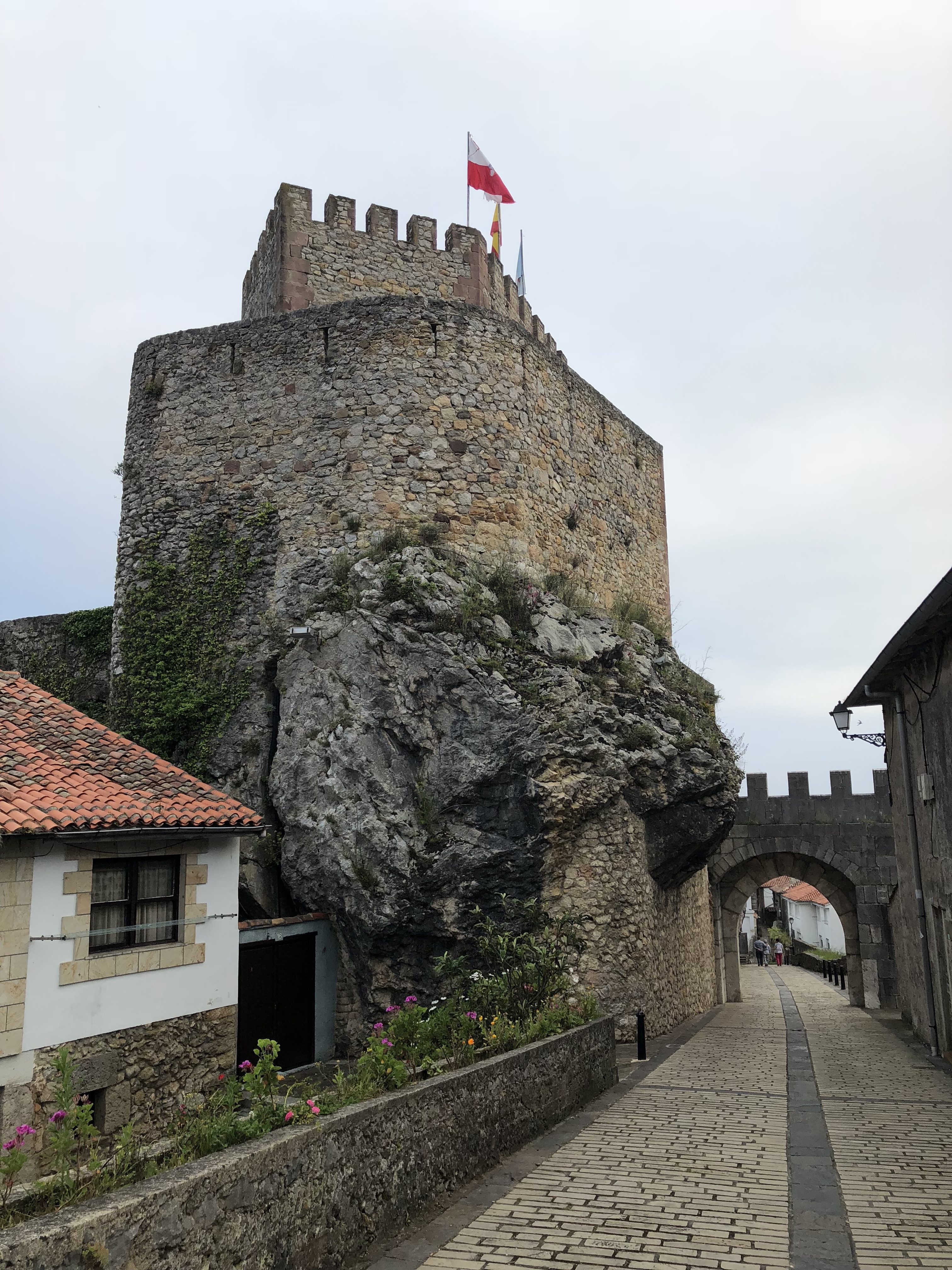 We couldn’t have chosen a nicer apartment for our first few days in Spain. We immediately headed north from the Madrid airport (it was much cheaper to fly into Madrid than anywhere else, so after a night’s layover in London to adjust to the time change, we flew into Spain, jumped in a tiny rented Fiat, and hit the road). Our first stop was the old town in San Vicente de la Barquera. Our apartment is about three quarters of the way down that narrow cobblestone road there. Out the window, you could see the rooftops and the sea, and watch the tides change. A small shop opened each morning underneath us. This photo is taken from a perch in the neighboring Castillo del Rey, a castle that dates from the 13th century (parts of it, even earlier).

It was amazing to walk back to our place late at night and pass a castle, and duck into our tiny wooden doorway. It was exactly the kind of place I was hoping to experience when we laid out the trip a few weeks back. The town is sleepy, with a small square with tapas bars and cafés, and an unfussy waterfront where we drank red wine and ate grilled octopus. Tourists pass over the town because it is sandwiched between some really amazing sites, but that’s why it was a perfect homebase for the family that prefers to be off the beaten path.

We did spend a day visiting Santillana del Mar, a medieval city with a beautiful old church (we especially enjoyed the sepulchre of Saint Juliana, who tamed the devil and dragged him around on a leash in the form of a demon for her whole life, which apparently upset her marriage counselors), and our first experience with the local sidre that is so popular in Cantabria and over into Basque country.

You don’t really want to know what this is for 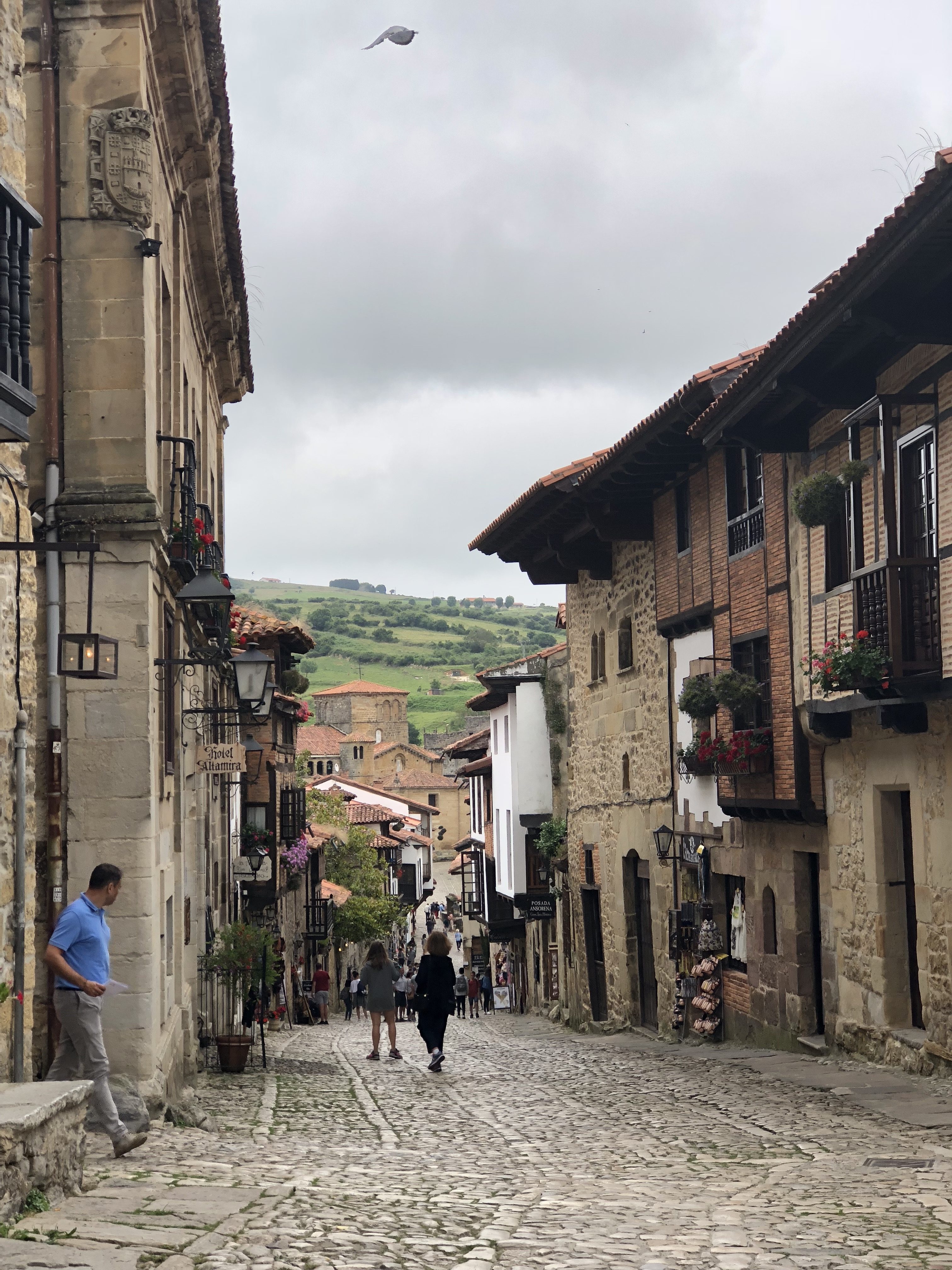 The kiddo was partial to the torture museum in Santillana, and I will say that it was pretty well-done, which meant I found it pretty sickening, especially as it all seemed really raw and terrifying with recent news of the U.S. detention centers at our own southern borders; what was probably for some a campy attraction seemed to me to be foreboding and just so very dark. But the town is lovely: small, winding, pale-colored ancient cobbled alleyways dotted with outdoor tapas bars. There are many tourists, but almost all of them were Spanish, except for one bus of French students. Most folks spoke a bit of English, but our kid had some decent Spanish in her arsenal, and we needed it and were grateful to have her along, as we always are! 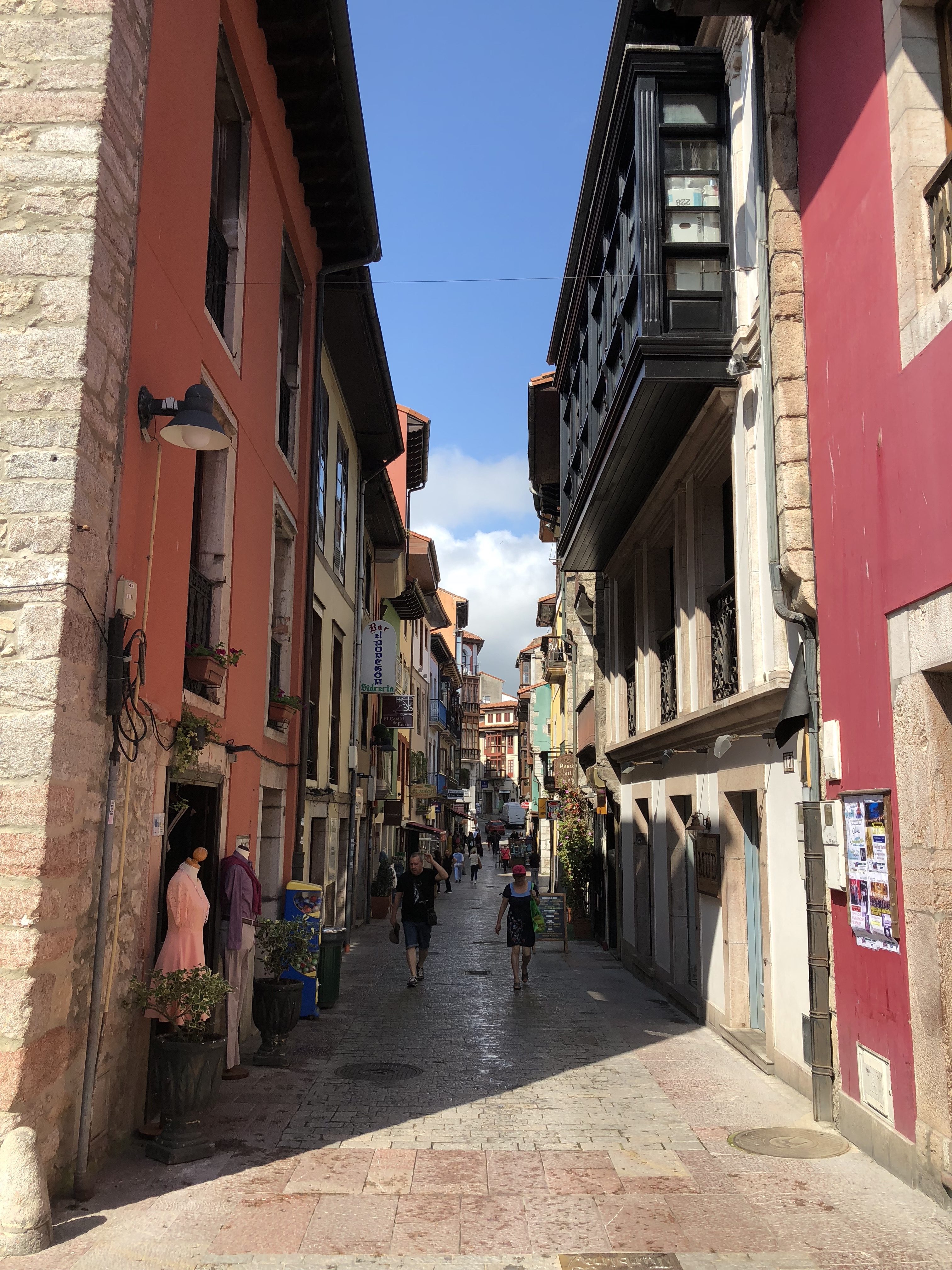 Santillana is just east of San Vicente de la Barquera. On the other side, just west, is Llanes, which was much different. Llanes also has an old town and a lovely church, but the rest of the town is much more upscale than Santillana, and we enjoyed the shops and cafés, and the European flair of the place. At the waterfront in Llanes, there is a now-weathered sculpture installation from decades ago, with huge painted concrete blocks that flank the whole coastline.

It was always nice after a day’s excursion to return to the quiet of San Vicente de la Barquera and our tiny street. 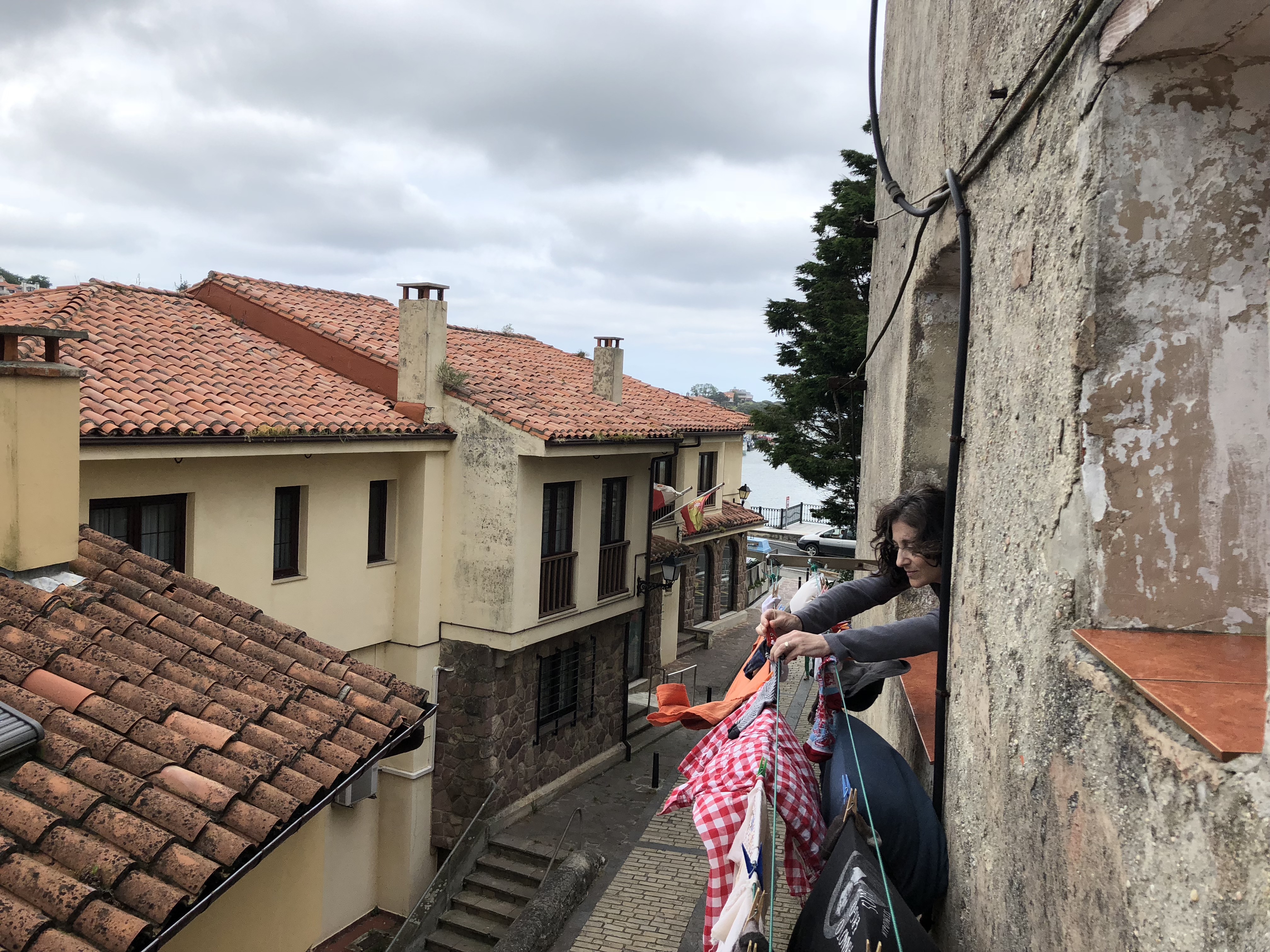 Hanging out the wash in San Vicente

On our final evening, we decided to splurge and go to a restaurant that was recommended in all the guidebooks. We knew it would be expensive, but we had saved some money by choosing very inexpensive accommodations throughout the trip and eating mostly from grocery stores (lots of cheese and bread, no complaints!). So we were not too worried when we went to Annua (I’m not linking to much in these posts, but I MUST link to this one). We arrived and were thrilled with the spot right at the tip of the land, with a view out to the breakwater, with torches on the porch and a staff lined up to welcome us. Then we noticed there were three people serving us and they all had on linen gloves. And then we saw the prices, after we were seated. So Phil and I leaned our heads together. The meal was going to cost a quarter of what the whole month-long trip would cost. I felt sick to my stomach. Then I looked at the menu. I thought of the years worth of conservative decisions I have made in my life. I thought of what I wanted to remember in my life when my days were ending. I looked out at the sea. And I decided no freaking way– we had to leave NOW.

Then I looked at Phil and it was all over because that man looked like he aged backwards seven years as he looked at the menu. And the kiddo’s eyes were like saucers and well, reader, I had married him. And so we stayed. And we ate. Carlos took us on our “experience” (that is what they called it and they meant it), and I will never, ever, never feast like that again.

Below are some photos from the meal, which took about three hours. We were one of two parties in the restaurant, and each course was narrated with stories of preparation and culture and ingredients. I honestly don’t have words to describe the meal. I was grateful they did.

To read about how this all started, check out the beginning of our journey. Otherwise, for the next leg of the journey, follow us to Bilboa, Andoain, and San Sebastian.